Theresa May is Reviewing the Situation 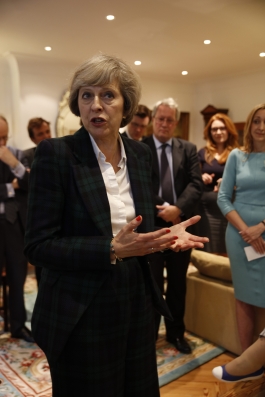 This week sees the Conservative Party Conference and it is pretty clear that part of the PM’s strategy is to position the Tories as the natural home of those who care about fairness and social justice but think that Jeremy Corbyn’s Labour party is really not for them.

The speech that Theresa May gave in Downing Street when she first took office was clear initial grab for this market, with her talk of those who have a job ‘but don’t always have job security’ and her promise to make decisions in the interests of those for whom ‘life can be a struggle’. She repeated those phrases at her first speech at the Conservative Party Conference on Sunday and added that not only would workers’ rights be protected while she was Prime Minister, but they would actually be enhanced.

This last reference, it seems, was to her appointment of  Matthew Taylor – head of the Number 10 Policy Unit back in the days of Tony Blair and now Chief Executive of the RSA  – to carry out a Review.

Reviews are splendid things. Everyone loves a Review. Conducting a Review into something allows everyone to hope that good things will soon happen – but without you having to make any actual decisions or proposals. Best of all, for as long as the Review is ongoing you can bat away any questions on an awkward topic by saying ‘The Government takes [the thing being Reviewed] very seriously and is currently conducting a Review. Detailed proposals will be made in due course’. Make the Review sufficiently in-depth and you can keep this line going for a year or more.

Matthew Taylor’s review seems to be particularly wide-ranging. The RSA explains on its website that the review will look at

ways to ensure that the regulatory framework surrounding employment, and the support provided to businesses and workers, is keeping pace with changes in the labour market and the economy

Of particular interest to employment lawyers is the fact that the review will look at the extent to which the growth in ‘non-standard’ forms of employment has undermined key employment rights and whether the current definitions of employment status need to
be ‘updated’ to reflect new forms of working. This holds out the distinct prospect of employment rights being extended to workers in the gig economy and is a very welcome development.

But of course, employment status is something that has been looked at before. Back in 2014 Vince Cable, the then Business Secretary in the Coalition Government set up an internal review which looked at exactly this question. As far as I can see, however, nothing emerged. I’m sure a detailed review was conducted and found its way onto the Minister’s desk, but it was presumably put aside when the Conservatives won a majority in May 2015. If I were Matthew Taylor, I’d ask to see a copy.

I’m sure that Matthew Taylor – an interesting and serious figure – will do a good job and I have no  doubt that the Review will provide much food for thought and make interesting reading. I hope he finds a sensible way of delineating who should and should not enjoy the protections we currently give only to those who are engaged under the increasingly archaic arrangements we describe as a contract of employment (see more of my views on this here). I hope he comes up with some concrete proposals that will genuinely ensure that vulnerable workers who currently fall between the cracks of employment law get the protection they need.

But forgive me if my socks don’t roll up and down just yet. I am not convinced that the Government harbours any genuine ambition to extend the scope of employment law – that would run completely counter to their belief in cutting red tape. This review is more likely to be a clever piece of positioning at a time when the Labour Party is in disarray. Even if the Government is acting in good faith then getting around to actually changing employment law is going to take years. Frankly, the Government’s attentions are likely to be focussed elsewhere for the foreseeable future and I would be astonished to see anything other than cosmetic changes this side of a general election.

Employment law consultant, trainer, writer and anorak
View all posts by Darren Newman →
This entry was posted in Employment status. Bookmark the permalink.