USA v Nolan: Why America must be kicking itself

Dozens of generals and CIA types sit around a huge table. Uniformed flunkies are busying themselves in the background, carrying messages, whispering in the ears of the great men who have gathered to meet the president. Around them huge screens glow with maps showing the positions of warships; the potential trajectories of missiles. There is an air of urgent and important business.

They all rise when the President arrives and when everyone has settled he gets straight down to business. 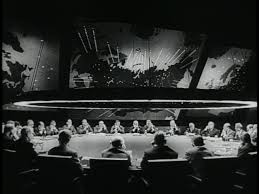 PRESIDENT: Gentlemen, we all know that the world has changed. We need to focus our resources on the Far East and scale back our commitments in Western Europe. For instance we seem to be running a ‘watercraft repair centre’ in a place called Hampshire over in England. I want to close that and instead open a new – yes General?

GENERAL: (his hand raised) Well Mr President, it’s an interesting idea, but we’d better not rush into this. We’ll need to hear what Mrs Nolan has to say first.

PRESIDENT: Forgive me, its hard to keep up with European politics, who is Mrs Nolan?

GENERAL: She works on the base sir. She’s a budget assistant.

GENERAL: Well sir, she’s a civilian employee on the base and if we close it down she will likely lose her job. Under UK law we have to consult with the workforce representatives about ways in which we can avoid making people redundant.

PRESIDENT: Oh well fair enough. I wouldn’t want to make a decision about the geopolitical distribution of American military resources without hearing what a budget assistant in Hampshire thinks about it. She may have some useful suggestions about how I can deter China’s territorial encroachment of the South China Seas without starting a new cold war. Do you have her number?

You can’t sue us, we’re a country!

This is the scene I like to imagine whenever I think about the case of USA v Nolan which  has been running since November 2006 and is far from over, despite a ruling last week from the Supreme Court.

The case did indeed involve the closure of an American ‘Watercraft Repair Centre’ in Hythe in Hampshire with the loss of 200 civilian jobs. There was, however, no consultation about the closure of the base. Mrs Nolan, as an employee representative, has taken on the World’s greatest superpower in claiming that she should have been consulted under s.188 of the Trade Union and Labour Relations (Consolidation) Act 1992.

Mrs Nolan is my hero.

For me, the most delicious detail of the case is that everyone agrees that she should have fallen at the first hurdle. It is common ground that the USA could have claimed what is called ‘state immunity’. In other words, the USA could have said ‘you can’t sue us, we’re a country’ and the claim would have been dismissed.

However, America chose not to invoke state immunity, preferring to argue that the duty to consult did not apply to the strategic decision to close the base. At the time there was good reason to think that the law was indeed limited in this way and that the employer did not have consult about a closure decision per se, but rather about the redundancies that arose as a result. However the EAT then held in UK Coal Mining Ltd v National Union of Mineworkers (Northumberland Division) that the duty was to consult about ways of avoiding the redundancy and if a closure decision made redundancies inevitable, then the employer had to consult about that decision. By that time the opportunity to claim state immunity had passed and America had a real fight on its hands.

Mrs Nolan won her case in 2008 and that decision was upheld by the EAT in 2009. In 2010 the Court of Appeal referred questions to the European Court of Justice about just when the duty to consult arose and in October 2012 (!) the Court decided that it was nothing to do with them because the Directive didn’t apply to public administrative bodies. That led to an argument before the Court of Appeal to the effect that the rules on redundancy consultation were not intended to go wider than the Directive and that they were therefore not applicable in this case. The Court of Appeal rejected that argument just last year, and their decision was upheld by the Supreme Court last week. The case has now been sent back to the Court of Appeal to determine the outstanding issue of just when in the employer’s decision making process the duty to consult arises. Mrs Nolan is no longer taking an active part in the proceedings, but she doesn’t need to. It now has a life of its own.

Somewhere buried in this case is an interesting and difficult point about exactly when the duty to consult arises. My own view is that the real question should be the quality of the consultation that takes place before the dismissal rather than the point at which the duty to consult arises – but that is a whole other article. In the meantime, pity the poor American official who decided not to claim state immunity on the assumption that the law didn’t apply to the closure anyway. ‘What’s the worst that could happen?’ he or she must have thought. Ten years on, and no end in sight, I think we can answer that question at least.

3 Responses to USA v Nolan: Why America must be kicking itself